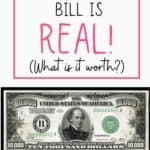 Over the years, the United States currency system has undergone several changes, especially for paper money. The US dollar has undergone significant changes for various reasons, such as increased costs, lack of demand, and overcoming the intricacy of thieves. Because of the changes, different paper money denominations aren’t readily available, such as the $10,000 bill. Currently, the highest denomination in production in the US is the 100 bills, but in the past, the Federal Reserve produced 1,000, 5,000, 10,000, and 100,000 dollar bills.

Unfortunately, the US treasury stopped printing big denominations several years back, but they didn’t lose their worth. The $10,000 dollar bill is not just a piece of paper but has considerable worth and value. It is uncommon to have someone hand you a dollar bill higher than $100. The highest dollar bills you can currently lay your hands on are the 100-dollar bills, implying that anything more significant will instantly raise suspicion.

Interestingly if you have such a dollar bill, you shouldn’t be worried because the US Department of Treasury and any national bank recognize these bills. Not long ago, the denomination was in public circulation, but you may wonder where these bills went. This article explains in detail the elusive $10,000 dollar bill and how you can make a kill if you hold a legit bill.

Although a dollar bill used to exit it is no longer in circulation, it is still legal tender in the US. The $10,000 dollar bill was the most significant US currency denomination ever in circulation. Currently, the bill is very rare and will be very valuable in any condition. Interestingly the US treasury printed the 100,000-dollar bill as the largest US currency denomination in 1934, but this was never put into circulation and was used mainly by banks to make large transfers.

Currently, the chances of stumbling into such a bill are meager. According to estimates, the number of $10,000 dollar bills in circulation stands presently around 350—most of the bills are in the hands of private collectors and museums. So if you have a 10,000 dollar bill in your possession, don’t think about spending it on groceries because it could be worth more than its value. Because it is rare, the bill has more value than $10,000.

The federal government wholly redesigned its system for producing currency in 1928. It reduced the size of the bills by roughly an inch in length and width, issuing the new, smaller ones in the familiar $1 to $100 denominations. The Treasury did, however, also print larger denominations that include the 10,000-dollar bill. The 10,000-dollar bill (Salmon P. Chase) was issued alongside the $5,000 (James Madison), $1,000 (Grover Cleveland), and $500 (William McKinley) bills.

Interestingly the federal government has issued various types of 10,000-dollar bills, but some of the most commonly available notes are those produced in 1928. The bill featured Salmon P Chase, and a few people have heard Salmon speak about the rarity of the $10,000 dollar bill.

Although Chase’s name is not familiar to those of the presidents featured in other dollar bills, he was nevertheless a big wheel in US politics. In the mid-19th century, Chase served as America’s Chief Justice, had stints as Ohio’s senator and governor, and was the first Secretary of the Treasury of Lincoln’s administration. 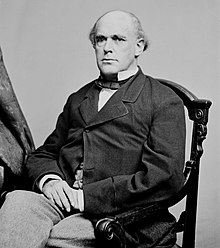 The 10,000-dollar bill features Salmon Chase’s portrait. Many may be wondering who Chase is, considering most bills have done portraits of popular American presidents. However, his case was of a man in the right place at the ideal time.

In 1861 when the US federal government began printing dollar notes, Chase was Secretary of the Treasury, in charge of developing and popularizing the greenback notes. Salmon P. Chase was chosen by the politically aspirational Chase to be the subject of the first 1-dollar bill. Chase’s photograph appeared on the face of the new 10,000-dollar bills when the Treasury began printing them in 1928 to recognize the man who was instrumental in introducing current banknotes, even though it never helped Chase win the presidency.

Why did the treasury issue the 10,000-dollar bill?

It wasn’t merely to make room in the wallets of fat cats, like it or not. The primary use of these enormous bills when they first began to be printed by the Treasury was for money transfers between financial institutions and banks. Before the full development of modern wire transfer mechanisms, it was reportedly simpler and safer to pay a partner bank $10,000 in cash to resolve an obligation. There was hardly a reason for the large bills until transmission technology got more secure and safer. Unlike now, when significant transactions between banks were carried out with wire transfers, during that time, bank transfers were through the $10,000 bills.

The 10,000-dollar bills never became very popular with the populace because so few individuals had them. Because of this, in 1969, these bills were regarded as big denomination money. Additionally, due to their extreme rarity, their present worth exceeds their face amount.

Related Posts:
$1000 Dollar Bill: Value and Important Details for 2023
TiFiPay App Review: The Smarter Way to Manage Your Bills Online
13 Tips For Cruising on a Budget in 2023

What are the different series of $10,000 dollar bills available?

There are two series of $10,000 dollar bills, but they both have Chase’s portrait. The first is the 10,000 Series 1918 Green Seal, the rarest of the notes. The bill shows the pilgrims on the back as they navigated to North America.

Are there any $10,000 dollar bills currently in circulation?

On July 14, 1969, the US treasury announced that it would stop issuing $10,000 bills alongside other big bills, such as the $500, $100, and $5,000 bills since the notes were sparsely circulated. The bills hadn’t been printed since 1945, so the Bureau of Engraving and Printing didn’t need to halt production. Surprisingly, there are still bills in circulation, but dint expects to get a 10,000 bill whenever you withdraw money from an ATM.

The Treasury stopped issuing the bills, and they were soon no longer in use. If you have a $10,000 dollar bill, it is still legal tender, and since the US government printed it, it will still honor it. The largest denominations were initially created to reduce time, make it easier to complete large-scale transactions, and save overall bank time and labor costs. However, the notes didn’t reduce transaction time, and they were barely put to use.

There are still some $10,000 bills out there, though; as of May 2009, they were around 336. Slate also noted that 165,732 $1,000 bills and 342 $5,000 bills were still in circulation at the time. Considering in the current age, it is easier to counterfeit dollar bills, it is unlikely to see these high denomination notes in circulation or have any new production soon.

The Fed maintains that these bills are still valid even if the Treasury now doesn’t print them. So indeed, you could stroll into Walmart and hand them $10,000 cash to purchase a new TV, albeit it undoubtedly would raise some questions.

But that would not be the best course of action. Most of the remaining high-denomination bills are kept in collectors’ vaults, where they frequently fetch sums far higher than their face value when sold at auction. For instance, depending on market conditions, a mint $10,000 dollar bill can sell for up to $140,000 on the market.

Considering the bill is rare and most held by collectors and museums, it is currently worth more than $10,000. It would help if you did not take your 10,000-dollar note to the bank as you will be given only $10,000. In the bank, you should only keep it in a safety deposit box where the bill will be safe. Depositing this rare bill to your checking account is bad news as you will not get value for your iconic note. For instance, Chase bank acquired one 10,000 dollar bill after a deceased client’s family found the bill in a deposit box of the deceased client and exchanged it for $10,000 in cash.

Research estimates there could currently be less than 350 $10,000 notes in circulation. Most importantly, it is estimated that only eight of the 1928 Series bills are said to exist. Of these eight notes, two are in museums, and because of this rarity, their value I considerably high. The 10,000 dollar bill is considered a collector’s item.

The few available 10,000-dollar bills will be paid for with great pleasure by collectors. In some circumstances, this may be worth upwards of $140,000 for a new bill, but if the dollar bill is damaged, you could quickly get close to $30,000 for it. So, it’s simple to say that discovering one of these notes is like finding a hidden treasure.

The collector is where you’d like to take your bill. Its value is based on how it is right now. We shall also talk about the various sorts of its conditions here. For collectors, a $10,000 bill in excellent condition might be valued at more than $140,000. However, even if the bill is damaged, it could still be worth roughly $30,000.

Therefore, before bringing your paper money to a bank, be sure that you understand its value. Unfortunately, too many tales exist of people discovering rare, antiquated bills and selling them for current prices.

The grading system of 10,000 dollar notes

There is a grading system for the $10000 bill, which includes very fine, extremely fine, and Ms 63 uncirculated. Notes considered very fine are those that have been in circulation for quite some time and are relatively crisp. The bills could have some folds and light smudges.

Bills graded as extremely fine are those that have been lesser circulated. Although the note might have its original crispness, it could still be bright. The bills don’t have any stains, discoloration, or tears but might have some folds.

Lastly, the MS 63 uncirculated bills are those that have never been circulated. Therefore, they don’t have any original crispness, nor do they have any stains, folds, discoloration, or tears on them.

The value of your $10,000 dollars will depend on its condition based on the grading criteria outlined above. However, since most of the 10,000 dollar bills were not used much, most are still in excellent condition and can earn a considerable fortune for owners.

If you have more information about the $10,000 bill, let us know in the comments!

Pin to Pinterest so other moms can find out about the $10,000 bill too! 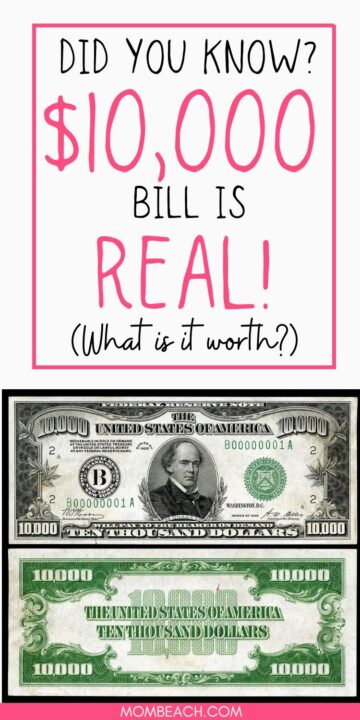 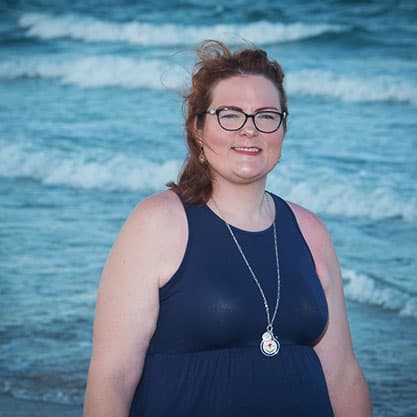 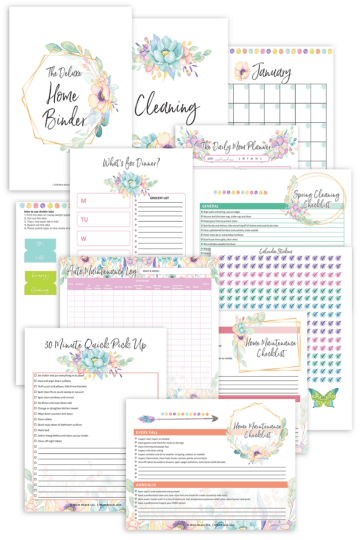 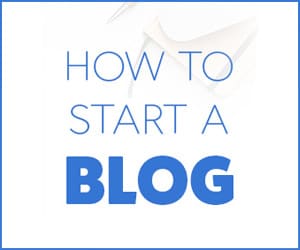 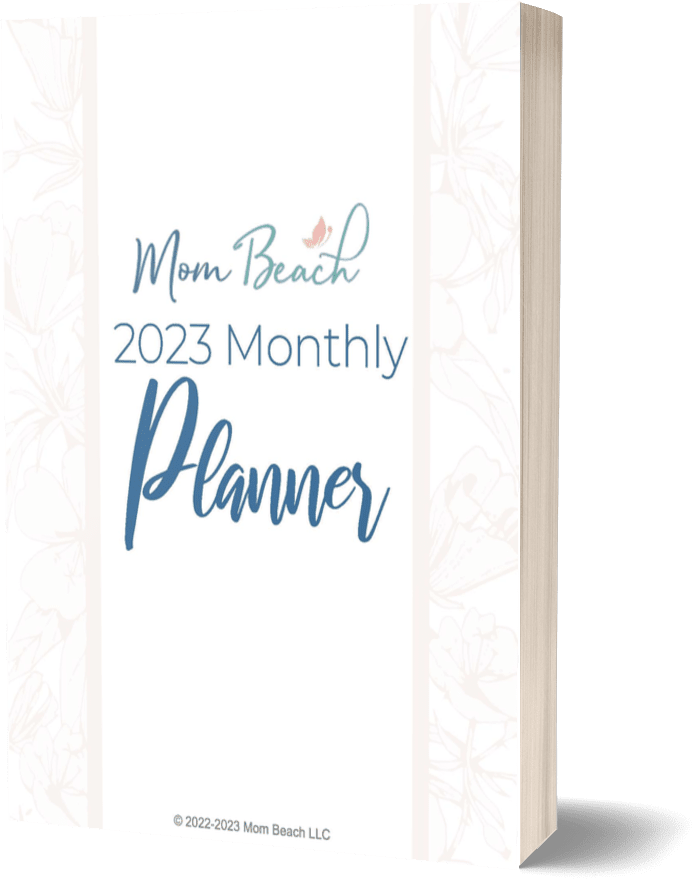